Take Out Your Lassos – It’s Time For Wonder Woman Leadership 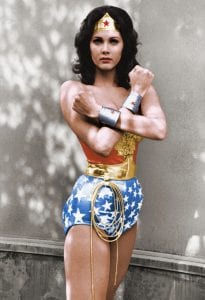 Wonder Woman was popularized by DC comics in the 1940’s during WWII. She was a woman warrior with power and strength encouraging women to work and support the war effort. Wonder Woman was one of the first icons depicting women as leaders who fought for what was right and just. Wonder Woman was revitalized 40 years ago for a new generation in the exciting 1975 TV series.

During WWII women ran the economy while men went off to fight the good fight. Rosie the Riveter and Wonder Woman were created to change women’s perceptions about what we could accomplish. Before the 1940’s women were encouraged to stay at home – and told a Woman’s Place is the Home – Women are the weaker sex – it’s a Man’s World.

And yet today we know that a Woman’s place is in the House (and Senate) and in the near future the Big White House. Research shows women are indeed the stronger sex. We live longer; have greater stamina and better health. Mother Nature simply would not choose “the weaker sex” to give birth and keep the species going. No way Jose! And as far as this being a man’s world – well I think it’s time to create a world that works for everybody especially women and children.

Wonder Woman broke the old paradigms that limited what a woman can be and do. She was initially depicted as a warrior that fought the evil axis military forces. WOW! Women could see themselves as leaders with power and strength. Wonder Woman also had superhuman powers – two are particularly important for women today.

This year, we celebrate 100 years of women’s suffrage. Yet 40 years after the passage of the Equal Pay Act, women still earn 80 cents to a man’s dollar. Latinas earn 60 cents. 30% of female headed households are in poverty – and in the richest country in the world – more than 1 in 5 of our children are poor. Today the most common job for women is still secretaries! A woman with a college degree will earn 1.2 million less over her life time than her male counterparts. And AARP members listen up -elder women are one of the fastest growing poverty groups. Their income is $8,000 a year less than retired men.

Let this 100th year of women’s right to vote be a call to sustain the momentum of the Women’s March – to revive Wonder Woman leadership and ignite our warrior spirit. It is time to take out our lassos of truth – and to use our array of intuitive abilities to create a just, equitable and inclusive world for our children and grandchildren.

There was another old saying they use to tell women — ” A Woman’s Work is never done!!”  Yep that is right! So let’s finish the Job Ladies!! We have the power, we are warriors, we have Wonder Woman.

Juana Bordas is the author of two award-winning books The Power of Latino Leadership and Salsa, Soul, and Spirit: Leadership for a Multicultural Age.  She was founding president of The National Hispana Leadership Institute, served as a trustee for the International Leadership Association and The Greenleaf Center for Servant Leadership. She currently serves as president of Lideramos – The National Alliance of Latino Leadership Programs. Among her awards: Colorado 2009 Unique Woman of the Year; Inductee The Colorado Women’s Hall of Fame; selected as A Wise Woman by the National Center for Women’s Policy Studies. In 2020 she received the Life-Achievement Award from the International Leadership Association.

Yes You Can — and Yes There Is!

How to Notice and Release Stress During these Trying Times

Turn Your Passion Into Profit

What You Need to Know Before You Start Writing a Book

We are a non-profit dedicated to empowering women through online mentoring, educational resources, and accountability to build wealth, confidence, happiness, and success.
Smart Women’s Empowerment Program is a project of  United Charitable, a registered 501(c)(3) public charity EIN 20-4286082. Donations are tax deductible as allowed by law.
Menu